It was in between 5th and 6th period after lunch as I began preparing the classroom for my AdoptED presentation. As I was passing out the colorful branded pens that we would later use for our assignment and chatting with incoming students, I noticed a young man walk into the classroom with his headphones on, look at my PowerPoint slide on the projector and walk out. I wondered what was going through his mind. He seemed upset. Did he forget his homework in his locker? Was he annoyed to have a guest speaker? Maybe he had an argument with his girlfriend at lunch? Or maybe he had a negative experience with adoption. I wasn’t sure but I was prepared to be mindful. Often in the classroom we don’t know what a student is going through that day or back at home. Just shy of the tardy bell, I saw the student return and slump down in his chair at the back sitting alone. 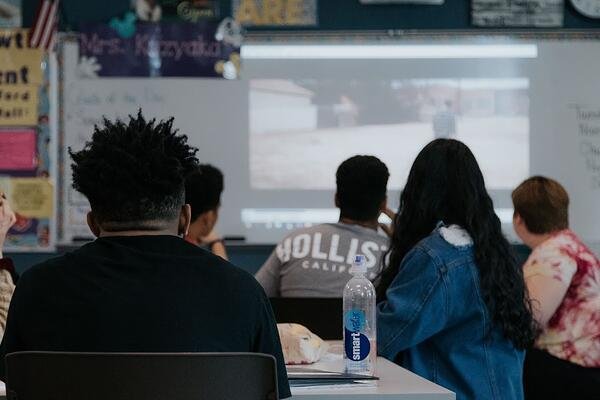 One of my favorite parts of our dynamic curriculum are the side conversations that come from our discussions. During the presentation the class started to give me their ideas of why a woman in an unplanned pregnancy might make an adoption plan. With 16-year old’s, you never know what answers you’re going to get. However, this class was, unfortunately, educated on real life hardships. I was impressed that they were able to think of so many barriers to parenting no matter how difficult they were to talk about, especially in front of their peers. I noticed the student in the back take out his headphones as the conversations went on but he never spoke. It was apparent that these teenagers came from different cultural, economic and social backgrounds yet they were still willing to listen to the information I was giving. It was as if I could hear them expanding their values and beliefs and they quickly became memorable.

The class broke out into partners to begin making mock family profile books for our role play activity. I saw the student slumped in the back approach his teacher. I was walking around the room when the teacher signaled for me to come over. “Would you like to tell Ms. Amy what you just told me?” she said. He then started to tell me that before the presentation he saw the word Adoption on the board and he wanted to leave class but was glad that he stayed. His Mother had placed his biological half sister for adoption when he was in elementary school and everyone in his family had always been upset with her about it. He went on to tell me how he remembered going to the pool every summer when he was little to play with her and her adoptive family would bring her. I was not expecting this to be his connection to adoption and was thankful that he felt comfortable enough to share this with his teacher and myself. He paused for a minute and said, “Yeah, I’m glad I stayed. I can understand why she might have done it now.” Those words almost turned me into a puddle. He further explained his Mother’s situation at the time she made her adoption plan. How she was a young Mother, already parenting him and his other siblings when she became pregnant again with her then boyfriend who she had a dysfunctional relationship with. Now a teenager, it was amazing that this young man could show compassion for his Mom all these years later and it felt so genuine.

He quietly returned to seat and got back to work. On my journey back to the office I wondered if he would go home and share something about what he had learned with his Mom, or maybe a sibling or Grandparent. It didn’t matter. His perspective on Adoption was changed and that meant everything. That was a moment in my first year with AdoptED where I felt confident that this program is truly changing perspectives on adoption.

adoptED is presented by